Dear reader, the inspiration for this entry came after watching (and truly enjoying) , the movie Le Mans ’66 Ford vs Ferrari. I must admit that at first, I wan’t too convinced about it. I was sure I would be watching a movie full of clichés (the italians as the mafiosi and very bad guys, and the Ford people as the good guys). None of that. In my opinion, the movie pays homage to both the fight on track, as well as from a corporate point of view, in a very respectuous way. This movie made me reflect on how little I knew about racing in the 60s (despite being a petrolhead).

So, for a true enthusiast like me, this movie ignited a deeper interest on car racing during those years, because, if you look at it from a certain perspective, you’re looking at the predecessors to the mighty Porsche 917, the Ferrari 512, and, in a certain way, the group C.

During the second half of the 60’s, car racing manufacturers offered us wonderful examples of engineering greatness, from the likes of Ferrari, Ford & Lola. Expedite and mighty engines bolted to the very best chassis back in the day, and all of this wrapped in aerodynamic body shells. The result of all of this is what you can consider real savage rolling sculptures, tamed by the racers, –or should I say driving artists- sitting behind the steering wheel.

These three cars competed in the endurance categories in the second half of the 1960s in Europe and the US. Each of them represents from a technical point of view, the idiosyncrasy of the firm to which they belong.

The GT40 is a clear example of an Anglo-American development powered by a 4.7 to 7-liter V8, in which Ford poured all its technical resources. The Ferrari 330P4 represents once again the idyll of the Italian firm with its 3.0 to 4.0-liter V12s, and its experience in high competition. And the Lola T70, another demonstration of its good work in chassis matters, which depending on the team to which it was sold, fitted engines of different origins: Ford, Chevrolet, both of these with remarkable success. An Aston Martin engine was even fitted to it at Le Mans 1967, although the experiment with the latter engine did not bring the expected result.

The record of the Ford GT40, and the automotive splendor of that time has returned to be on the automotive fans minds, especially after the recent movie Ford vs Ferrari

Admittedly, in plain language, the Ford GT40 opened the gate for true wild beasts to race at Le Mans. And better still for the fan, it took Ferrari out of its complacency, and forced them to «get on their feet». 13 victories in different endurance events between 1965 and 1969, is quite an achievement. The architects behind the wheel of its success were none other than the likes of Mario Andretti, Ken Miles, Bruce McLaren, Chris Amon, Lloyd Ruby, Roy Salvadori, Carroll Shelby, among others.

As for the Ferrari 330 P4, of which only 3 units were made, it had a very short life, a single year in competition, 1967. On its debut, it achieved a crushing triplet at Daytona, which set off alarms in Ford. This gave a spectacular start to the season, returning Ford, in a way, the blow received at Le Mans the year before. It also won the 1000 miles of Monza, although at Le Mans, he could only finish 3rd. In the final world championship classification, the 330P4 came first, thus giving Ferrari a new constructors’ world title. At its controls, drivers such as Chris Amon, Ludovico Scarfiotti, Lorenzo Bandini and Mike Parkes.

As for the Lola T70, it is also one of those racing cars that started with a promising debut. In 1965, a Lola T70-Ford was victorious in the Monterrey Grand Prix (Laguna Seca). In 1966, its greatest result occurred in the Can Am series, winning 5 out of 6 races, in the hands of John Surtees with a Lola T70-Chevrolet. Thanks to an exception in the new FIA regulation for 1968 limiting cubic capacity to 3 liters, both the Lola T70 and the Ford GT40 could continue to participate if at least 50 units were manufactured. The Lola T70 continued to participate, achieving an important victory in the 1969 Daytona 24 hours with the well-known Lola T70 Chevrolet by Mark Donohue. The one pictured here is another version, which raced at Le Mans 1968.

What about these slot versions?

The fact that three different manufacturers offer such distinctive vehicles underscores the interest in this particular era of motorsport. In the case of Fly’s Ford GT40, the quality of reproduction, as always, is beyond question. In my opinion, in addition, the finish in gold tones of the profile of the tires is very successful, and the contrast of the blue and white tones of the bodywork. As is often the case with Fly models, a delight to behold.

As for Policar, and if memory serves me correctly, it came out almost on par, simultaneously with another 330 P4, offered by Superslot. The model in our article is that of the Policar version, and in addition to a very sober and accurate reproduction quality, in which Ferrari red predominates above all else, the slot.it heritage is noticeable in the mechanical part.

The Lola T70 from Thunderslot is another joy to behold in terms of reproduction. For those of us who are unfamiliar with or «lost» the 60s, this Lola is another model in which the increasingly refined aspect that resistance vehicles were beginning to show began to be perceived. It is full of details that it is nice to observe, from the air intakes, the simulation of the rivets, the curious solution of a flap at the bottom of the windows, I imagine that to help ventilate the cabin …

On the mechanical side, none of these three slot cars presents revolutionary solutions. Mechanical layout with sidewinder engines, although it is true that in terms of ride quality, the Policar and ThunderSlot are more refined than the Fly, which requires some work to «smooth edges».

What other versions are there available?

Few manufacturers of the Ford GT40 have resisted the charms of this motorsport icon, among which Exin-Scalextric, Superslot, NSR, Slot.it, Fly stand out. Here in this photo you have a an Exin version, from a blog in which a nice restoration of it is carried out,  http://ksg000.blogspot.com/2013/12/restauracion-ford-gt-40.html 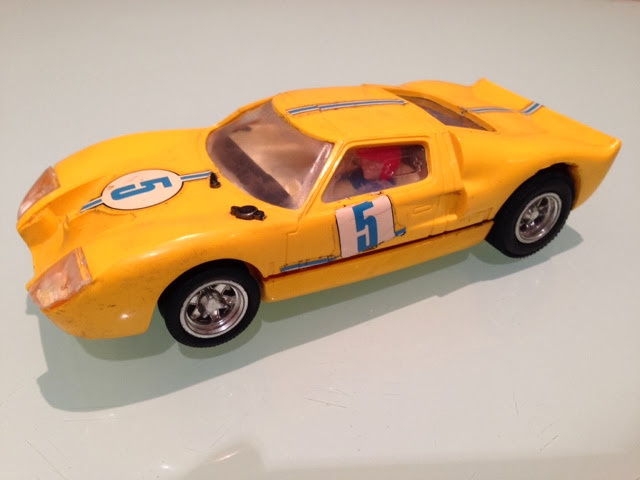 Regarding the Ferrari 330 P4, another essential entry in the minds of slot enthusiasts and collectors, we also have versions from renowned firms Exin-Scalextric, Policar, Superslot, Carrera.

As for the Lola T70, you can say that Thunderslot has put this model «on the map» again. Other manufacturers with attractive and interesting versions of this racing car include Fly / Slotwings, Sloter… Fly once offered the 1969 Daytona winner, with Mark Donohue at the wheel, and the characteristic Sunoco livery. 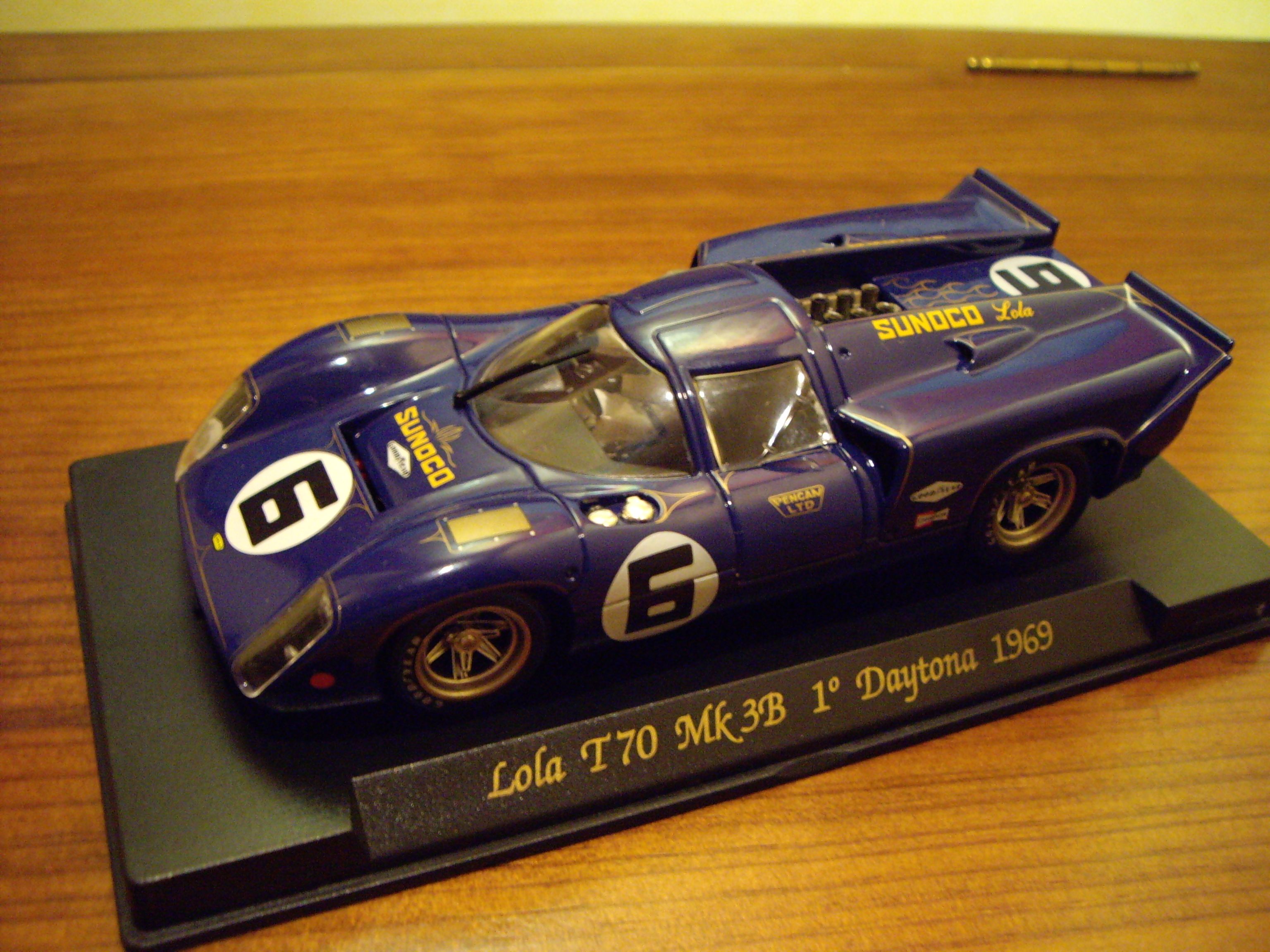 I leave you with a series of photos with these three icons on the track. Thank you very much for reading. See you in the next article.